MASTER
Home
About
Get There
Register

Grand Prize & Regional Award, sponsored by the Chamber of Commerce of Greater Philadelphia & the Arts + Business Council of Greater Philadelphia:
The Doan Brothers, written by Ben & Oliver Samuels
Logline: The incredible true story of five Bucks County Quakers who became folk heroes in the earliest days of the American Revolution. Pushed to fight and robbing from the British and Continentals alike with Robin Hood-daring, the Doans served no King or Congress, but fought for the beautiful, untouched land of the Native Peoples and William Penn in one of the greatest and most heart-wrenching love stories of unchanging men in a changing country ever told.

TV Prime Time Award, sponsored by Comcast and NBCUniversal:
No Love Lost, written by Page Peter Wilson
Logline: A combat veteran and his partner work tirelessly to reunite teenage runaways with their families.

Student Award, sponsored by the Derek Freese Film Foundation:
Liberty Investigations, written by Lindsay Michel
Logline: A private investigator and his intern work outside the law to solve cases in Philadelphia.

Annette Kaplafka:
'Romeo & Juliet', 'Much Ado About Nothing', 'Valentine's Day'

Chadwick Antonio Rawlings
'Before I Self Destruct', 'Buddy Gilbert', 'Nebechadnezzer'

Admission: FREE.  Open to the public.

Parking Info: The Prince Theater offers discounted parking to attendees/patrons: Prince patrons can park for just $15 at the garage under Liberty Place, entrances on both 16th and 17th Streets, between Market and Chestnut Streets. In order to receive this discount, you must park in the Liberty Place garage, and pick up a “chaser card” at the Prince box office when you arrive at the theater to attend the performance. When used in combination with the parking facility’s own ticket, this chaser card will reduce the price of your parking to $15, for a period up to 12 hours. Please ask at the box office for detailed instructions on how to use the “chaser card.” 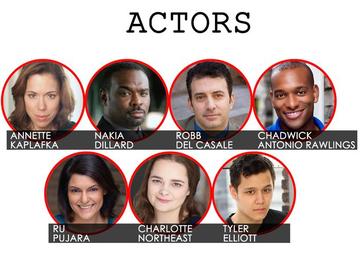